Ok, you have 12, 15, 18 (my house), 22 guests coming for dinner and, like me, you are feeling a bit flummoxed. How in the world can you cook for this many people? Well, it can be done but you will need to compromise. I know you like to make everything–it tastes better and it’s more fun, but let’s be honest, it’s exhausting.

So, how do you prepare a feast and still survive to enjoy it yourself? You don’t really want a lot of people 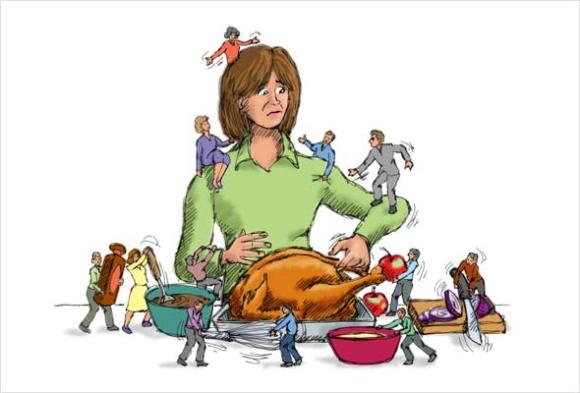 in your kitchen, so the best thing is to have others prepare some of your food. But how do you choose what you should make and what you should ask others (friends, family, Fairway) to bring?

I start from the principle that there are some items that are sacrosanct and must be done by you. In our house, these would be the soup (dealt with in my last post), the turkey with its stuffing, and a special dessert, Indian pudding. As far as side dishes go, I have tested out many different kinds of sweet potatoes–baked, candied, mashed, and except maybe for adding the marshmallows to the top yourself (with my own ears, I heard Julia Child say to Jacques Pepin in their Thanksgiving segment, “I rather like marshmallows.” Jacques doesn’t.), you can outsource this. The same goes for salad and green vegetables; you need to have them but the veg prep will kill you.

How do you outsource something? It goes like this, you call your guests and tell them what time you expect them. Then, when they ask if they can bring anything, instead of saying–no, no, everything is taken care of, just bring your sweet self–you answer, yes, green beans. If they don’t ask, say it anyway. They will be happy to oblige; if not, you should think seriously about whether to invite them next year. There is a certain amount of risk involved in this, but if their contribution is not great, serve it anyway–what is life without some risk?

But the stuffing sets you apart, especially if you bite the bullet and stuff the turkey yourself. This is not hard; you can do it and everyone likes it.

The family favorite is matzo stuffing, discovered during one Passover season and requested ever after. Here is my take on the original recipe from the Complete American-Jewish Cookbook edited by Anne London and Bertha Kahn Sihov–a tasty stuffing that is not mush.

Take three boxes of unsalted matzos, break them up, soak them in water until softer but not squishy, drain and set aside.

Melt two sticks of margarine (or butter) (or chicken or turkey fat) in a pan, fry four large chopped onions and one cup chopped celery in it until brown, add to matzos and toss lightly.

Just before cooking it, take your turkey, and fill the big cavity lightly with stuffing–do not pack. You can also try filling the (ahem) rear cavity to get the flavor but you will need something to hold it together–try the neck and/or giblets. Remember to cook your turkey slightly longer to account for the stuffed bird. (The Joy of Cooking says to add five minutes per pound.) The remainder of the stuffing can be made in a separate dish. Add more melted margarine for moistness. I know that Bobby Flay recommends adding broth, but he doesn’t stuff his turkey so I ask you, who is Bobby Flay?

Just a note about using sage; avoid it like the plague. Packaged stuffing reeks of it so it’s a dead giveaway and anyway I don’t like it.

We first tasted Indian Pudding at the Durgin Park Restaurant in Boston and acquired a taste for it. I use the recipe from the Joy of Cooking and I have made it every year; it is unique, and therefore worth making yourself. So with fervent thanks to Irma S. Rombauer and Marion Rombauer Becker for many years of cooking wisdom from their invaluable cookbook, I present their recipe for Indian Pudding. Warning: you may be obliged to make it annually.

Preheat the oven to 300 degrees.

Cook the cornmeal and milk mixture over the boiling water for about 15 minutes. Stir in the molasses and continue to cook for about 5 more minutes.

Remove the pan from the heat and stir in all remaining ingredients.

Generously grease or butter a 2 to 2 1/2 quart baking dish, and pour in the pudding mixture. Bake the pudding for 1 1/2 hours.

VARIATIONS: For a pudding with a soft center, pour one cup of cold milk over the top of the pudding without stirring – after one hour of baking. Then continue to bake the pudding for two more hours (a total of three hours baking time).

(Source: appsplayground.com)
While purists eat this with hard sauce, I still remember an earlier version of the cookbook that said: “It is a barbarous New England custom to serve this with vanilla ice cream.” Barbarous or not, that’s how we eat it. By the way, the above recipes work very well for a vegetarian Thanksgiving. Enjoy.