The two things most people remember about Charles Lindbergh are that he flew from New York to Paris in a 33-hour solo flight in 1927 and that he and his wife were the victims of a horrific child kidnapping and murder. Most Jews and many others also remember that he was a vocal anti-Semite, racist and, pre-Pearl Harbor, an apologist for the Hitler regime. All this was a backdrop to the film made in 1957 by Billy Wilder, The Spirit of St. Louis, and I have to say, viewing the film more than 50 years later, I was impressed by it. 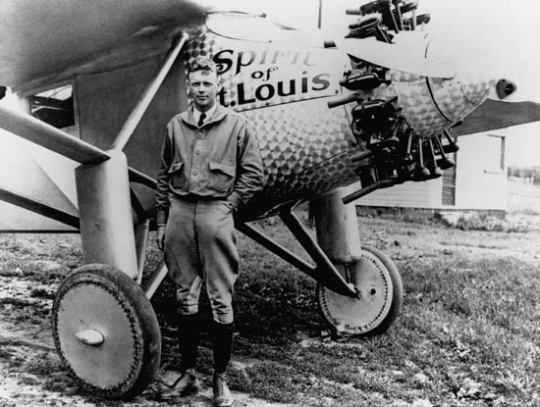 It was long, two hours and 15 minutes long, but I like long movies the way I like long books–if they’re good, you can really get into them and lose yourself. This was a saga movie–something like The Old Man and the Sea–and it really was, very appropriately, a solo flight. I think the stingy approval the film received originated in its very spare treatment of the subject–no women, no back story really, and very little of the after glory–just an engrossing trip spent with the navigator and his efforts to remain awake.

To me, the 47-year old Jimmy Stewart didn’t look too old to play the 25-year old Lindbergh as he did apparently to some of the contemporary reviewers.

He was his usual natural self and it worked well. The surprise was that, except for a few flashbacks, some of which are on the ground, we are up in the air with just Stewart, the plane and the music, all equal partners.

And what music. Director Billy Wilder must have had a soft spot for composer Franz Waxman, veteran of Hollywood films such as Rebecca, Sunset Boulevard and A Place in the Sun, (he won academy awards for the last two), because he gave him what felt like free rein. 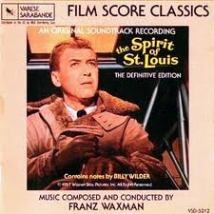 The soundtrack lists various sections of the film such as “Building the Spirit,” “Asleep,” and “Landing at Le Bourget,” and certainly there were definable sections within the music which, nonetheless, had great unity. Along with other composers of his generation, he was influenced by French Impressionism and the score shows it, but it is highly original.

A distinguished concert composer, Waxman also founded the Los Angeles International Music Festival where he premiered works by Stravinsky, Walton, Schoenberg and others. “Together with Erich Wolfgang Korngold, Max Steiner, Dimitri Tiomkin, Bernard Herrmann and Alfred Newman a United States postage stamp was issued in 1999.” (franzwaxman.com) This was a nice idea. 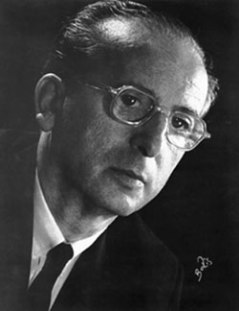 How many more famous and not so famous films were made memorable by their scores? And why is the score mentioned so infrequently by reviewers (an old complaint of mine)? For many, the score is just background–for others, it is a vital component of the film’s effectiveness.