Let’s face it, living the good life is hard work but, well, somebody has to do it. On Monday, with a goal of buying two $20 senior tickets for the Met’s production of Wozzeck, I went down early, stood on line for an hour only to discover I had misread the instructions. I could NOT get them at the box office, only on line or on the phone. I should have realized that when I saw how few people were on line.

So, I went home and sat on the phone line for a half hour. When the operator answered, and I asked for tickets to Wozzeck, she informed me that I had the date wrong and that Monday night’s performance was Werther and did I want those. I thanked her and refused the offer (ok, throw things at me, but I mostly can’t stand Massanet–with a few exceptions–even with the new great tenor heartthrob, Jonas Kaufmann).

On Tuesday, I sat on the phone for a half hour to try to get Prince Igor and was told that night’s performance was already sold out. (Those seniors are fierce.)

So I entered the lottery for Saturday night’s performance of Igor. Big news–I didn’t get it. Rory, in the goodness of his heart, went to Lincoln Center to stand on line for Rush seats two hours before the performance. He got them and the seats were fine. (You should know that 50 Rush tickets are set aside for seniors but 150 Rush tickets are available to everyone two hours before. You have a better chance but you do have to wait on line). 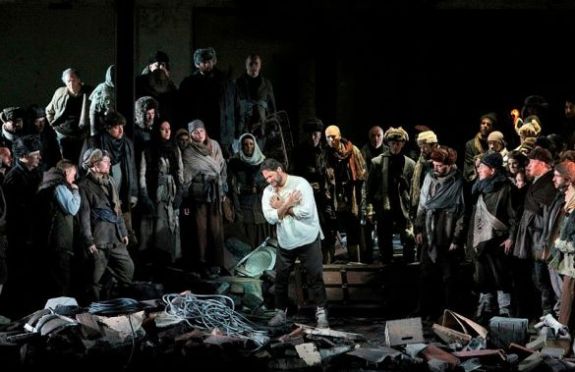 High points were  the beloved Polovstian Dances and the magnificent chorus brought out into the side boxes–the men standing on one side, the women on the other, in antiphonal style. The opera, newly revised with all of Rimsky-Korsakov’s music excised and leaving only Borodin, was a triumph of restoration but raises some artistic questions, I think. We had heard it before, sung by a Russian company,and had had much the same reaction. This work, made up from what sometimes seemed studio floor sweepings of Borodin’s sketches, is composed of a series of long solo arias, and sometimes dreams, with very little interaction between the characters, It has some beautiful music in it, but we wondered if perhaps, the restorers had been overly reverential in putting it together. My question is, if the artist has not done it himself, should we step in where angels fear to tread? Plus, the choreographer should be shot. Think dancers with their legs and feet completely hidden in a field of poppies.

Occasionally, one of them leaped over the poppies. So were we glad we went and was it worth the heroic efforts to get there? yes, it was, especially for $20 tickets. Next time I will try to pay more attention to the details. I’m thinking of starting again on Monday for Wozzeck….