Apparently, I have been a Wes Anderson fan all the time and didn’t know it. Or, at least, I will be now.

We saw The Grand Hotel Budapest and loved it, along with throngs of other West Siders brought by a New York Times rave review.

There were lines for every one of the multiple showings at the theater and you had to get there early to avoid the front row. We don’t mind getting there early–in fact, we are always early, usually too early. But this unfortunately results in 45 minutes of commercials and endless previews. Just when you thought the movie was going to start–another preview–really unconscionable and I don’t know how to make it stop.

The outside of the delectable hotel above was arrived at by means of a miniature, while the inside comes from a department store 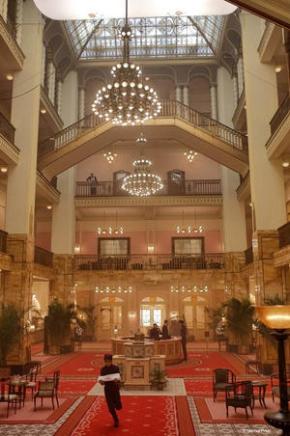 and other locales Anderson found in Gorlitz, a small town half in Germany, half in Poland, and close to the Czech border. (Interview with Anderson, NPR).

This is a funny film with serious undertones, taking place in the mythical land of Zubrowka between the two wars that is invaded by frighteners not unlike Nazis but called something else. I like my satire and moral lessons delivered lightly and this film does just that. The result is a witty, swiftly moving tale that takes in war, greedy families, murder, sex, and theft but with an attitude of affection towards its prime movers. Ralph Fiennes is hilarious as Gustave, the concierge everyone loves, especially his 80+ ladies from the hotel and the movie is filled with your favorite actors and mine doing great cameos: Tilda Swinton, F. Murray Abraham, Bill Murray, Edward Norton, Jeff Goldblum, Willem Dafoe, Owen Wilson, and an endless list of talented actors you may or may not recognize. Tony Revolori plays the young lobby boy, Zero Mustafa, who models his behavior on his mentor, Gustave, and in fact, is telling the tale.

and the bad guys are always mean, especially to small animals.

David Thomson of The New Republic resents the director’s claim that this film is based on Stefan Zweig’s works (“an abiding figure in modern literature and neurotic conscience”). Thomson prefers the Max Ophuls film, Letter from an Unknown Woman (1948), based on a Zweig novella.

Apart from this no doubt valid literary concern, this is a lovely film. It is not loud, violent, or cruel. You will enjoy it.