When the Vienna comes to town, we generally try to find a program we like and go. This time it was pure meat and potatoes—Haydn, Brahms, Brahms–and we were looking forward to it.

As we got there, Rory mentioned he didn’t see anybody, raising anxieties in me since twice before we had gone there and it was dark–once when we had the wrong date, and once when the streets were torn up because of the crane accident (they didn’t call us).

When we walked in, however, we saw where all the people were on this cold night. Quite a few were in the lobby, starting to climb up,

so we joined them, going up 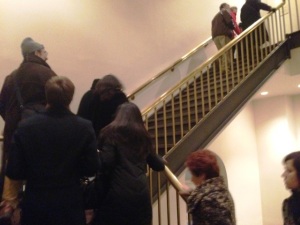 past the boxes in the Second Tier, 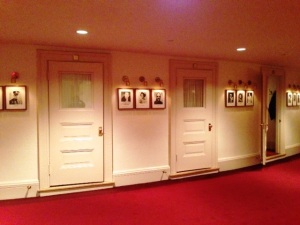 past the boxes in the Dress Circle 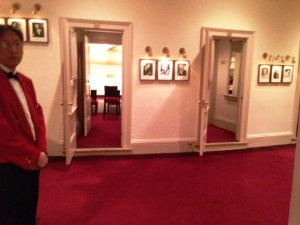 peering in as we trudged past,

then just one more flight.

We reached our seats and looked around–it was a fine sight.

As always the sound was perfect even if the view was kind of distant.

Led by Andris Nelsons, who will be the new Boston Symphony Conductor, the orchestra sounded terrific.  The Vienna democratically selects its regular and guest conductors and we will always hear someone very good–this time it was “the next big thing among young conductors.” (NY Times)

Both the Brahms Variations on a Theme by Haydn (now known not to be by Haydn) and the Brahms Third Symphony were premiered by the Vienna so presumably they know what they’re doing. The Haydn 90th Symphony was transparent compared to the Brahms’ dense texture and a rarely heard pleasure. The famous strings were there in force, sounding like one.

And if you can’t get to the “golden hall,”

Carnegie Hall is a great place to see them. The concert ended with Johann Strauss’ waltz “Seid Umschlungen, Millionen” (“Be Embraced, You Millions”) (NY Times), a delightful and generous encore played by the Vienna as no one else can.

As I’ve said before, these seats are not for the easily cowed but if the knees are still reasonably good, getting them is a coup that must be done well in advance.  And, of course, the less we pay per concert, the more concerts we can see. By the way, Carnegie Hall subscriptions for next year are now on sale and the Vienna comes every year.