Those of us who treasure the immortal Alec Guinness’ multiple roles in “Kind Hearts and Coronets” and of course, the exquisite malice of the great Dennis Price, will want to see this musical version of the 1907 novel by Roy Harniman (NYTimes.com).

If you are seeking a Broadway show with light-hearted music, clever lyrics and murder with a sweet touch, this is it. Just wander down West 48th Street west of Broadway, ignore the somber Of Mice and Men across the street at the Longacre,

and turn in at the handsome, beautifully preserved marquis of the Walter Kerr Theatre

where many people have lined up to find a ticket. 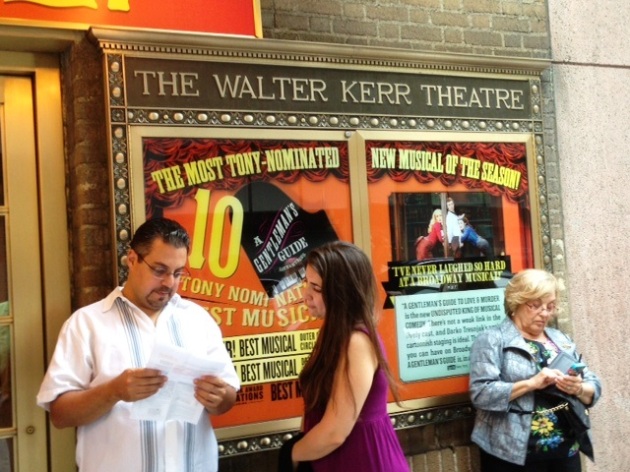 There is a very happy spirit among these theater-goers, as in–at last, something I feel I can go to. We felt that way, too.

Inside the theater is The Set–a mini-version of a music hall house–in case you didn’t get it. We got it.

The music and lyrics are by newcomer Steven Lutvak and the always fine orchestrations by the gifted Jonathan Tunick who could make a washboard-and-comb musical sound good. Not to minimize the cheery music and funny lyrics which were delivered with much aplomb by the up-and-murdering D’Ysquith, Monty Navarro, played by talented tenor Bryce Pinkham,

and the undisputed star of the show, Jefferson Mays, who plays all the other roles.

You will enjoy this show–a word of warning, however. As we mounted upwards to our usual cheap seats in the next-to-the-last-row of the second balcony, we wondered if they would serve us well. In fact, we could see everything but because of the laid-on-with-a-trowel English accents, we had some trouble deciphering the lyrics. Although, to be fair, our friends who sat in much better seats, said they also had some difficulties getting all the words. So, you may want to splurge a bit for this show to get all the funny bits. You can always sit down for another delicious viewing of “Kind Hearts and Coronets.”