I picked up The Monuments Men by Robert M. Edsel in the airport book shop—I always like a nice thick engrossing book to help me forget the agonies of the tiny seats and the person in front of me whose head is in my lap. This book fit the bill and although it is not fiction, uncovering the places where high-level Nazis hid Europe’s art made pretty exciting reading.

The book told the story through several important members of the Monuments Men, a group of mostly middle-aged scholars, curators, conservators, museum directors and one German-speaking American Jewish soldier, who found their way into the war almost at its end. I never got tired of reading about them tracking their way to various salt and copper mines where art was hidden, castles–Neuschwanstein in particular,

known to all Wagner lovers as mad King Ludwig’s castle whose walls were adorned with German mythological figures, 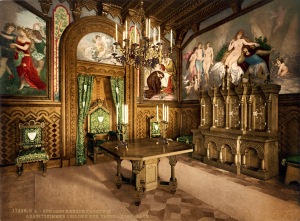 and a haven for the myth-loving composer–and private stashes by Hitler and Goering, who both adored art–who knew?

It reads like a series of mysteries but with lots of facts, contemporary letters and period photos taken by surprised looking soldiers as they gazed upon rare masterpieces. And who could deny the thrill of dashing Hitler’s hopes of creating the ultimate art museum in his home town of Linz, the art of course coming from private Jewish collections, early on deemed to belong to the state, and any other masterpieces that the Nazis came across as they destroyed Europe. 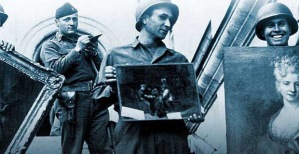 In particular, the book describes the long and finally successful hunt for the Ghent Altarpiece, the Lamb of God, by Hubert and Jan Van Eyck, a masterwork we were privileged to see in Saint Bavo Cathedral, never dreaming of its long journey to Germany and back.

It also depicts the difficulties of the race to save the art before Hitler’s “Nero Decree” to destroy everything as the Nazis retreated, including German art, monuments and artifacts, took effect, the conflicts between the Monuments Men and the army, who understandably felt saving their men’s lives took precedence over art, and the oncoming Russian army, that was picking up all the paintings and sculpture it could take back as partial retribution for the loss of 20 million Russian lives.

All of this information, however, makes the book’s conversion into a movie less than exciting and I’m not sure whether it’s due to the difficulties of transferring non-fiction into a quasi-fictional film or the fact that the ever-present George Clooney served as scriptwriter, director and star. If you are the one writing the dialogue, pointing the camera, and acting in front of it, the film might not have the critical balance it needs.

(Source: businessinsider.com) Those of us who are “Downton Abbey” fans will immediately recognize the talented Hugh Bonneville who plays the Earl of Grantham, to the right of the always handsome Clooney. And ever since Invictus, I have also been a fan of Matt Damon, but that’s irrelevant. Don’t get me wrong, I’ve liked some of Clooney’s work–notably Up in the Air, but not when he’s all over the picture. The movie plods along without any of the mystery-solving of the book and without enough of its historical background. Sometimes, there’s just too much material to transfer to the screen and sometimes a one-man band doesn’t have enough instruments to make good music.