There may be labor troubles at the Met, but you wouldn’t know it from the long, very long line at the Met for subscribers seeking to make exchanges.

In fact, it was two hours long and I should know since I am now suffering from what I understand is plantar fasciitis–or long-line-standing-on-a-stone-floor-itis. People were polite and friendly or involved in their own reading matter.

No one, but no one, would ever attempt to move into a place ahead of his, however as, in New York, that is akin to suicide. Kindred spirits were to be found everywhere as Met fans paid tribute to a star from another universe.

The golden gates were closed and locked

but New Yorkers and visitors read on.

My husband went back the next day to improve on our tickets and found only five people on line and that is what some people do, gambling that they will find something extra good among the subscribers’ returns. The only wisdom we took away from this is that it’s good to go both days, or possibly the whole week….

I understand that when tickets went on sale to the general public, the Met staff handed out Met mementos. Not so for the hard core, however; the administration knew we would be there unless and until the season was canceled; no mementos needed.

When we left, we saw Lincoln Center’s “Old Faithful” rise in a joyous tribute to our courage and perseverance. 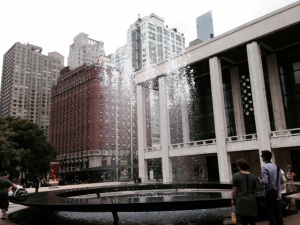