My guest blogger this week is my son, Simon, whose film criticism can be seen at curnblog.com and whose blog can be viewed at Skip and Setter’s Cinema Blogishkeit cinemablogishkeit.com

and whose opinions have always been and will always be inimitably his own. He also took some really great pix. Thank you, Simon!

“Here’s what the music of Gustav Mahler sounds like to me.

Take the loudest moments from Brahms and Wagner, and smush them together. Pour some nice spoiled milk over the mixture. Heat in the microwave until it becomes a paste, them try not to serve under glass, but accidentally trip over your shoelaces and spill the slop all over the targeted diner.

That’s exactly the type of sound I got Sunday afternoon at Carnegie Hall, which showcased a sold-out Mozart and Mahler program performed by the Met Orchestra and led by the immortal James Levine. Attending with my father Rory because his wife (and my mother – the owner of this blog) couldn’t accompany him, I initially marveled at the imposing concert hall before entering the building and walking up the winding stairs to get to our seats, which were in an obstructed-view box on the side.

It turned out that the view was just fine, as was the performance of Mozart’s famous Piano Concerto No. 21 (the “Elvira Madigan”), which featured Maurizio Pollini at the piano. Pollini’s style is a bit too pointy for my taste, but Levine’s orchestra sounded wonderful, and I relished listening to this excellent piece. 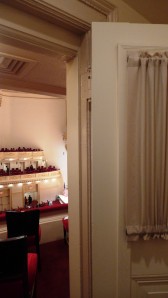 Then came the Mahler, which followed a quite-long intermission. It was the composer’s Symphony No. 9 that we were regaled with, and what a monstrosity it was. Not even Levine’s passionate conducting and a plethora of musicians (including two harpists) could save this piece, an ugly, jumbled mess with an inflated sense of its own worth and little genuine inspiration. The Mozart, as is always the case with the great composer, felt too short. The Mahler, on the other hand, felt too long.

Despite the bombastic dreariness of this piece, it was a rewarding afternoon, not only because I got to see Levine conduct live, but also because it corroborated my feelings about Mahler’s music, which I generally try to avoid. Levine got a rousing hand from the packed house at the end and exuded warmth, and I left as excited as before, owing to my desire to write up an account of this concert for my mother’s terrific blog. I must note that my views on Mahler differ greatly with those of my mother, though we agree on Mozart, whose music we both adore. So please don’t blame her for the opinions of this blog post. They’re mine and mine only. I take great pride in them.

One more thing before I go. Thank you mom and dad for giving me the chance to see this concert. As much as I loathe Mahler, I love complaining about his music more, so this gave me a superb chance to do exactly that. I love you both. And now … signing off.”