We have returned to this restaurant many times over the years and the quality has not declined. Now in the Excelsior Hotel on 81st Street just opposite the Museum of Natural History,

(excelsiorhotelny.com) the well designed rooms with a beautiful bar and some comfortable booths

provide a vibrant backdrop to some of the best food on the Upper West Side.

This is Nuevo Latino cooking, which brings together dishes from throughout the Americas and the Spanish-speaking world, so expect a wide variety with something for everyone, including those who, like me, tend to avoid food with, as they say, some heat in it.

They first bring you these delicious little cheesy buns–I forget what they’re called but I defy anyone to eat only one. 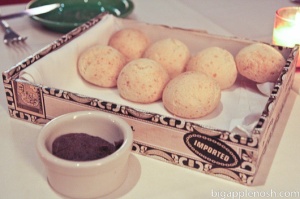 The appetizers are at least as interesting as the main courses, with no duds.You can begin with one of seven ceviches including lobster, octopus and red snapper or try a sampler of four. Our friends started with the Arepa,

and I tried the Puerto Rican rum glazed shrimp with avocado salad.

On to the main courses–while our friends worked on one of my favorites, the enormous Cuban style “Steak Frites” with fried yucca instead of potatoes, nice and crisp with plenty of carbs,

as  I munched on the spice rubbed salmon. As I didn’t get a very good photo of my salmon, I am actually showing you the malanga wrapped red snapper, one of my favorites, that I like better anyway. 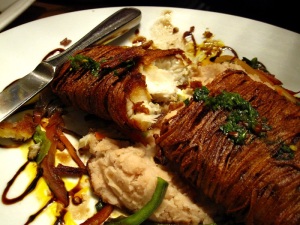 These were all great but the end was the best. Too often, even in good restaurants, the desserts are outsourced, but at Calle Ocho, they serve first class home made desserts, the sign of an eatery with ambitions. And what desserts they were.

(fullaccessnyc.com) was really good, and my lemon mousse was excellent

we all agreed that Rory’s Coconut Crema Catalan (imagine an ultra rich creme brulee with the scent of a toasted coconut topping) was the best.

We indulged in a pitcher of their Sangria Rojo for $33 which provided six to eight full glasses. Their cocktails, of course, are memorable.

Appetizers run in the low $teens, main courses in the $20s, and desserts about $8. If you get a deal from one of the coupon sellers, as we did, you can make out like a bandit but will probably end up eating too much. Truthfully, the portions are so large, you don’t need to order three courses although it was loads of fun.