It was Sunday afternoon at Carnegie Hall and the English Concert led by Harry Bicket gleamed as they dug into the rarely performed Handel masterwork, Alcina, in concert version. 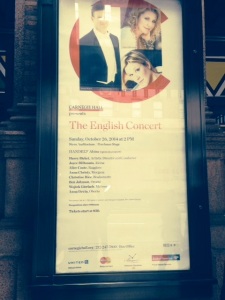 (flickr.com) played in today’s Handel manner, that is to say, without vibrato in the strings.

Styles have changed in this. Formerly, Handel’s Italian operas were played sedately; now they are played with vigor and passion, as are his English oratorios. Born in 1685–same year as J. S. Bach-a good year for music–Handel has enjoyed a renaissance in the opera world and both the Met and the much-loved now-deceased City Opera mounted his operas including Giulio Cesare, Rodelinda, Ariodante, and others.

The music is glorious but ferociously difficult for singers, so it’s often hard to find great voices that can also navigate the required runs. No problem on Sunday, however. The Da Capo aria, which, as all piano students know, means you go back to the beginning, is now sung with elaborate decoration in the repeat according to the taste and decision of the singer and the conductor, as it was in those days. This can lead to some odd proceedings; you have to hope for the best.

Also, as the mid-1750s were the heyday of the castrati, scholars and conductors differ on how to translate those roles into today’s voices, castrati now being non-existent. The last one, Alessandro Moreschi, died in 1922, and was the only castrato to be recorded.

Sunday’s performance used mezzo sopranos for two of the castrati roles, which meant five women and two men. I prefer the Met’s choice of two male counter-tenors for two similar roles. If anyone is interested, tenors and basses sing one octave below the typical female voice, but the castrati and today’s counter-tenors sing in the same register as women. So, one way or another, you get plenty of singing up high. Beautiful, but perhaps not to everyone’s taste.

Given all of that, it was a very good performance of this luminous piece. All the singers were very fine, but there’s no question that the standouts were mezzo Joyce DiDonato, Sunday’s Alcina, and mezzo Alice Coote, Sunday’s Ruggiero.

(nytimes.com) Joan Sutherland premiered the role of Alcina at Carnegie Hall in 1965 and was, as all the world knows, the greatest dramatic coloratura ever. She recorded the aria, “Tornami a vagheggiare” and I urge you to listen to it on YouTube to experience the summit of this bravura singing.

Performance practice is a hotly disputed issue among Baroque scholars and musicians, with some people coming down hard on questions surrounding the continuo (the bass and/or harmonic line played by the harpsichord, cello and in this case the theorbo,) and everybody with ideas about who should sing what. All I can say is, it’s all fun and as no one really knows for sure, you should go and make up your own mind.

A note on our upgraded seats. We moved to the Second Ring, back row, which enabled us to be on the same floor as the rest rooms (still crowded)

and the food. The velvet high chairs have a foot bar–very comfortable. They’re reasonably priced and you can hear, if not see, perfectly.

By the way, if you are unfamiliar as yet with this music, I can say to you as one of our professors once said to us students, “Then, I envy you.”