Celebrating the last outing of the beloved Otto Schenk production at the Met–you know, the one with the entire Nuremberg street of houses three stories high in the second act– 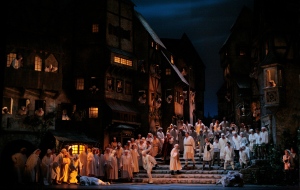 (nromusic.com) James Levine brought down the house on a glorious evening of music and song.

Fine singers including the reigning Walther Von Stolzing, Johan Botha, who sings above the staff throughout in one of the most punishing tenor roles in opera,

(nromusic.com) James Morris who gave us a movingly thoughtful performance of Sachs, and Annette Dasch as a soaring Eva,

(minnesota.publicradio.org) illuminated the production along with the usual sumptuous Met Orchestra and Met Chorus. And we needed all of them–according to the WSJ, about 166 musicians in the pit and 91 singers. Probably one of the reasons this opera–Wagner’s second to last– is not staged too often is that it requires tremendous forces to do it and a conductor strong enough to to hold them together. This is the longest opera in the Met’s repertoire and this is one of the best places in the world to hear it. I include Bayreuth, whose hard benches and lack of air conditioning don’t appeal to me and I have always hated the fact that the Festspielhaus orchestra is under cover there–true, according to Wagner’s demands–but I really love to see and hear the musicians right up front.

(wikimedia.org) This opera is about art, music, aging and the renewing power of love. Hans Sachs, the main character, is a shoemaker in his daily life but is revered as the greatest poet/singer of his time and is always addressed as Master. There was a real Hans Sachs in the 1500s, born in Nuremberg, who remained a shoemaker all his life because the true meistersinger did not write for money.

The newcomer is a nobleman who has given up his lands and come to Nuremberg to learn the art, but he brings a somewhat dangerous spirit of innovation with him (kind of like Wagner, you think?) for which he is roundly condemned by all except the noble Sachs who shows him how to write a meisterlied that both breaks new ground and stays within the rules. The new music triumphs and we revel in the glory of the “prize song” that does indeed bring laurels to the knight. In this German Brigadoon, art is king. What is there in this plot do you think that would cause the Nazis (including Herr Hitler) to love it and generations of Jews to shun it?

Well, it does have a very nationalistic fervor to it and there’s a lot of singing about the preservation of the “sacred German art.” And Wagner,

(haaretz.com) who was overtly anti-Semitic, did create an hilariously incompetent poet/singer, Sixtus Beckmesser, who makes every mistake in the book,

(operanews.com) and whom some people think had certain qualities Wagner ascribed to Jews. Edward Rothstein in the NY Times article of January 1993 quotes a 1991 article in the Cambridge Opera Journal, “Nuremberg Trial: Is There Anti-Semitism in ‘Die Meistersinger’?” Barry Millington finds the evidence overwhelming. (He summarizes it in the New Grove Dictionary of Opera.)

Beckmesser’s failings are precisely those Wagner ascribed to the Jews in his notorious essay on Jews in music: Beckmesser has no melody or art of his own but preys on others (even stealing Walther’s song); he speaks of loopholes, and he acts with legalistic ruthlessness. .. Beckmesser’s two major songs have awkward rhythms, unbalanced phrasing and a whining melisma that listeners of the time recognized as satires of Jewish melodies. His music jerks according to Wagner’s idea of Jewish speech: a “creaking, squeaking, buzzing snuffle.” ..Sachs’s warning that “evil tricks threaten us” and his call to “honor your German masters” are a bit frightening; they were meant to be.”

Today, many of these allusions are lost on us, and we are left with a great work of art, with uncomfortable associations. I prefer to remember this character as depicting Eduard Hanslick,

(wikimedia.org) the unfortunate music critic who hated Wagner’s music and who will be forever immortalized in this nasty character. Surely, no artist ever had such a revenge on a critic and we just love it.

Since the Israel Philharmonic decided to play Wagner, I figured it was ok for me to listen. After all, he’s dead now and can’t benefit from it. For me the summation of Die Meistersinger, one of my top five operas, will always be the triumph of music and art over politics. As a Jew, I cannot forgive Wagner for his views, but I can and will listen to his glorious music forever.