For the first time in many decades, I have actually seen three of the movies nominated for Academy Awards including Birdman, Grand Budapest Hotel and The Imitation Game, all of which were excellent in their own ways.Why didn’t I see the others? well, it’s complicated, having to do with my own reluctance to see anything violent or really really unhappy.

(flickeringmyth.com) I’d classify Birdman with Hotel because of these films’ imagining off-the-earth qualities; I like that element when integral to the plot as it is in both cases. Michael Keaton turns in his usual superb performance (as in Clean and Sober, although his Shakespearean foray as Dogberry in Much Ado About Nothing was pretty strange) and he rises, literally and figuratively, on the screen as he looks back with longing to his past superhero role.

(eonline.com) His upcoming theater Broadway debut is supposed to restore him to former glory but his life, his past mistakes and his irrational hopes get in his way–just like all of us. And that’s what makes his character, Riggan Thompson, very human and familiar. Famously filmed to appear as if it was done in one shot, the movie doesn’t impress me so much with its technical prowess as with its remarkable characters, fulfilled by two remarkable performers.

(film.com) Edward Norton, in what is perhaps his best role so far although he has had many (I especially liked his work in The Painted Veil), is a perfect foil for Keaton as the two actors–both real and imagined– act their socks off with each other. Norton represents the success Keaton longs for and while Keaton respects his talent, he also is annoyed by his bumptiousness as we often are.

What about the flights of fantasy? I loved them because they seemed very real to me, very like my own childhood desires to fly and be above all the hateful things that happen in life, even to, or should I say, especially to the very young. They are well integrated into the film and while they surprise us a little, they seem absolutely right. 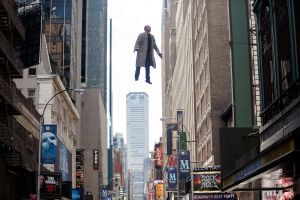