Slated to hear Jonas Kaufmann do one of the two performances of Don Jose at the Metropolitan Opera he signed on to, we, like the other 4,000 Met audience members were disappointed to read in the Times that he was ill, but not disappointed enough not to go. And Carmen is a great piece and this is a terrific newish production–lots of sex and gore.

Years ago, Rory tells me, you could count on Rudolph Bing’s last minute casting changes to be, shall we say charitably, less than top drawer. But since Levine has been in charge, you will almost always get someone very very good, so we usually go. This happened last night with Yonghoon Lee stepping in for Kaufmann. 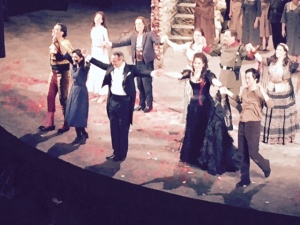 Not only was he a very acceptable substitute for the reigning tenor-du-jour Kaufmann, in one night, he rose to what I think will be instant stardom. He got better with every act and finished up with a tremendous final scene as we all watched the opera’s inexorable tragedy. 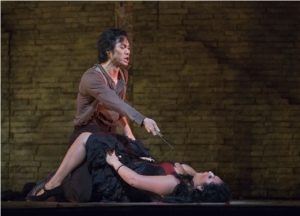 (latinospost.com)He was helped in this by Elina Garanca, one of the finest Carmens we have seen with a gorgeous sound and none of the vibrato wobblings and darkenings we have heard singers use to get the power of the low notes out. The conductor, Louis Langree, whom we have grown to like a lot, kept the piece moving, never letting the singers distort the music to their own egos. I especially loved the male dancers stamping their feet in great Spanish dancing, even during Carmen’s solo gypsy number. (nytimes.com)

This was an exciting Carmen with blood as the main theme, from the opening prelude now with dancers 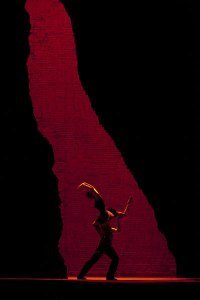 to the knife Carmen uses on her friend, through Escamillo’s Toreador Song which contains graphic descriptions of the bull’s blood, and of course, on to the bloody end.

The audience screamed its appreciation of Lee’s amazing feat

and, after the final curtain dropped, we heard what I have never heard before, the cast cheering Lee off stage. There is one more performance of Carmen with Kaufmann slated to sing, but as we didn’t feel like paying $389 per seat, we won’t be there; I hope you will as he is very fine.

On the other hand, Lee is scheduled to sing Don Carlo very soon and you may want to get tickets to hear this great singer.

I do have to say that my favorite in the role of Don Jose has been and always will be Placido Domingo. Just to make sure, I listened to him again singing the “Flower Song” and, just like always, I cried. He takes the high B flat at the end in a full-voice pianissimo, something no other singer can accomplish and throughout, his phrasing reminds us that in addition to possessing one of the world’s great voices, he is also a consummate musician and actor.

(cineplex.com)  My son was singing in the children’s chorus at the time and after Domingo patted him on the head, he said he would never wash his hair again.