Somehow the presence of Colin Firth and Michael Caine lured me into thinking I would get a clever and thoughtful or at least a genial and stylish spy thriller.

(entertianmentwallpaper.com) Despite the usual expert performances of these mega-actors, we got none of the above. I know, I know it’s based on a comic book, but I have loved the Superman, Spiderman and Batman films and this doesn’t measure up. Nor does it achieve the supreme silliness of the James Bond movies it tries to emulate. 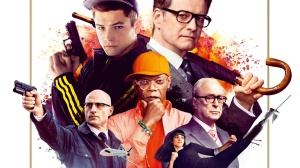 (moviecapsule.com) Yes, there’s comic book violence in all of those, but this goes so far beyond that it is too much to stomach–or at least for my stomach. From the shock of the opening scene where a good guy is sliced vertically in half, to the slaughter of about 100 people in a church–true, they all hated Jews, Gays, and Blacks–but really, do we have to murder them to change their minds? to the ultimate unacceptable scene of the hero being asked to shoot his dog–

(sky.com) (spoiler alert–because I hope you never have to see this movie–he doesn’t), this is too much.

Resembling Steed in “The Avengers,” Firth brings his usual aplomb to the role but asking him to do this is like asking Bobby Flay to make you corn flakes–it’s just not appropriate.

Kingsman reminded me a lot of Guardians of the Galaxy–at least in noise and violence– but without its charm, and I hated that movie. Don’t go and especially, don’t be on time because the ticket cost doesn’t preserve you from a half hour of exceedingly loud commercials and a second half hour of even louder and more violent trailers. This has got to stop!