(nytimes.com) If you loved Gigi, the movie, there are remnants of it here, most notably the music and lyrics including additional songs by the authors, Alan Jay Lerner and Frederick Loewe. Unfortunately, these extra songs are not up to the rest of the score and finally, after many years of defending it to Rory, I had to admit this score was not equal to Lerner and Loewe’s best work. Still, many of the songs are charming and lilting and this show could have been worth doing if there hadn’t been the elephant in the living room–yes, the PLOT.

(madfilm.org) The 1958 film is so gorgeously designed by Cecil Beaton, so beautifully directed by Vincente Minelli  and the roles so perfectly cast that you tend to put aside the issue of what this show is about–the selling of Gigi’s virtue. In this Broadway version, however, the role of the materialistic Aunt Alicia, played in the movie with exquisite wickedness by the great Isabel Jeans,

(pixshark.com) has been expanded so that we are much more aware of what is going on here and we don’t like it. Do we really want to see a tasteless and endless scene of lawyers dancing as they quibble with Aunt Alicia about the terms of Gigi’s sale?

The role of Honore Lachaille, the boulevardier with the twinkle in his eye. originally played by the irresistible Maurice Chevalier, 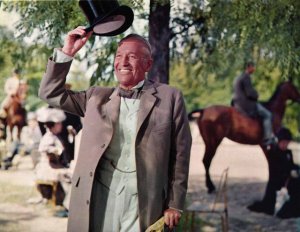 (imdb.com) who could carry anything off, was sung well by Howard McGillan, 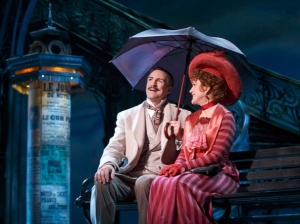 (broadway.com) a familiar and welcome Broadway pro with a fine voice, who stood out as the best actor. The other actors reminded us of how much we missed the wonderful Hermione Gingold, Leslie Caron, Louis Jourdan and even Eva Gabor.

Musical notes: Every song ended with a high note; yes, they could all hit them, but really, when is a good thing too much? The original memorable score and orchestrations by Andre Previn were jettisoned and new ones with plenty of loud drums and cymbal crashes were added; not an improvement. The much ballyhooed changeover from Honore Lachaille singing “Thank Heaven for Little Girls” to her grandmother and aunt doesn’t really change the slight distaste we feel today for the song. In fact, it may be worse having her close family sing it.

The Art Nouveau filigree set looked good on stage in the background as the dancers did their stuff in the foreground–strangely athletic and sometimes jerky/quirky choreography, however.

The 1973 Broadway version was not well received and certainly, no critic raved about this one. Bottom line? perhaps this should be the last of the Broadway versions of this story and we should continue to enjoy the film as the unique work that it is. Should you be inclined, however to hear the songs and lyrics performed live as I was, I believe you can get discount tickets at TKTS.