This past Monday evening I went to Han Dynasty on West 85th Street for their monthly 15-course tasting menu event, hosted by Chef Han personally.   Shelly opted out because of concern over possibly highly spiced dishes, but my good friend Henry accompanied me. He’s a big fan of eating banquet style (he says it’s less like sitting in church while you eat) so he was a natural for these festivities. 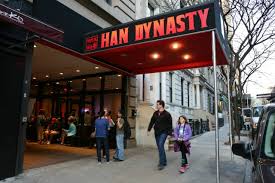 (glenwoodnyc.com) Han Dynasty occupies a roomy former ballroom of a West Side hotel with old-world decor 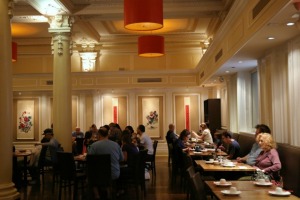 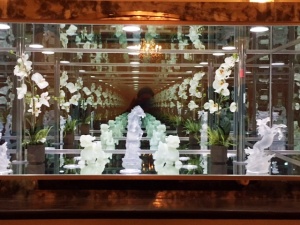 Our table consisted of friendly and urbane diners from London, Syracuse, and NYC. 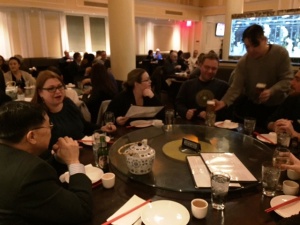 When Matt departed, he left with the comment ‘See ya around in Zabar’s, Rory’.

Although the restaurant is known for HOT Szechuan food, they will accommodate diners who wish slightly toned down versions of interesting dishes. On a previous visit, we saw that the regular menu labels the dishes from one to ten in heat; forewarned, Shelly ordered the fish with no number and pronounced it delicious. 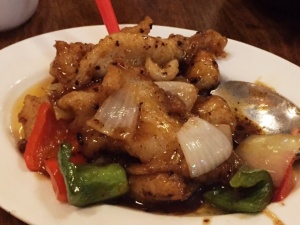 I mostly avoided the long green and short red hot peppers, a wise move unless you know and love them. 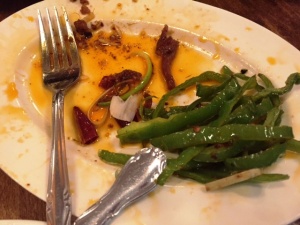 On Monday, the food consisted of dishes largely not on the regular menu and although we were all happy to try the dishes as they were intended to be seasoned, Chef Han said his aim was to encourage diners to try new dishes, not to put them off with extreme spiciness. 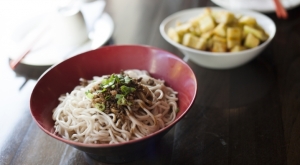 (handynasty.net) About 40 diners attended, most at circular tables for eight, and we quickly developed the kind of easy conversation typical of wedding banquets or ocean liner cruises. 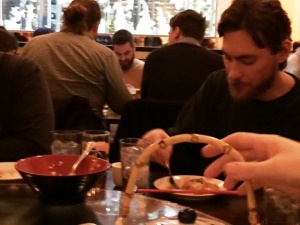 Even the spicier dishes had considerable flavor — not just heat. We had a beef dish that was particularly savory — wonderful flavor in addition to the heat. Excellent eggplant 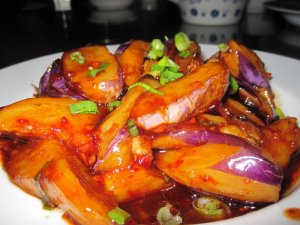 (yelp.com) and a great sweet/sour shrimp dish that was actually rather mild. Also outstanding, a vegetarian dish featured celtuce, a delicate vegetable with a wonderful delicacy and adaptability to its tasty sauce. 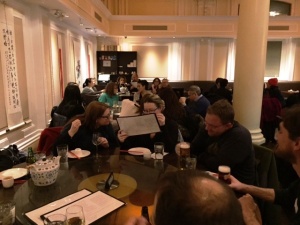 Han is only 37 years old (and a former IT professional, if you please) and already owns eight restaurants. He obviously enjoys playing host to this bash, working the room with his own blend of anecdotage and friendly good humor. When I asked to take a photo of him, Han immediately pulled me into the picture with him. 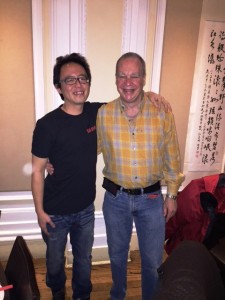 He told us some colorful stories about some dishes’ names: Saliva shrimp means that you salivate in anticipation, not that it contains saliva; small pox tofu is so named because the elderly lady who created it retained the marks caused by that once-dreaded disease. 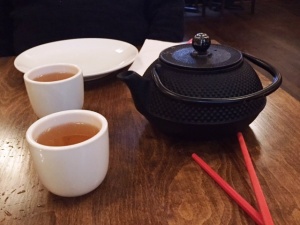 The Han tasting menu is on the first Monday of each month at 7:30 PM and costs a very reasonable $40 per person. Reservations are essential. 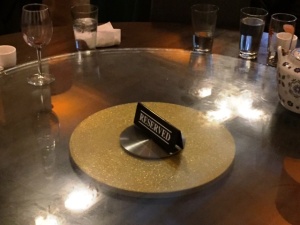 But if you want a lunch or dinner any other day as well, there’s plenty of opportunity to eat first rate Szechuan food with or without the famed numbness or “ma” that hot spicy food induces in your taste buds.

Sent from my iPad