Sometimes in my dreams, I imagine a musical heaven (something like the scene in Stairway to Heaven

(powellandpressburger) where Rory and I are watching W. A. Mozart conduct his 42nd symphony and all our fellow music lovers are listening intently with us. That longing to hear more of a long-gone composer’s work came true at this concert where we heard two cut songs from On the Town and Wonderful Town, plus three songs from the failed musical 1600 Pennsylvania Avenue, lyrics by Alan Jay Lerner 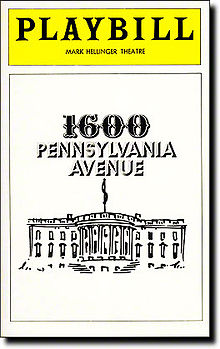 (wiki). For years we had been searching unsuccessfully for a recording of this score. Not only were the songs glorious but they really gave us the sense of the direction Leonard Bernstein was going in before his death. 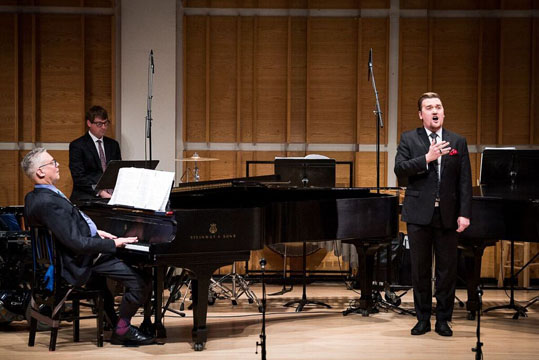 (www.theaterpizzazz) brought tears to everyone’s eyes as we all contemplated our responsibility toward that House at 1600 Pennsylvania Avenue. Blier also included songs from West Side Story, whose poignant close harmonies I heard clearly for the first time in performance and, of course, Candide

The second half of the program was the composer’s Songfest, less theater music than art song, and requiring more than a brief hearing. Words were by great American poets–Walt Whitman, Langston Hughes, Gertrude Stein, etc., and included a thorough march through various musical genres.

We promptly made up our minds to attend more at the Kaufman Music Center and especially The New York Festival of Song, moderate in price and scale while superb in quality and cast.

Bernstein at 100, produced by the New York Festival of Song and Kaufman Music Center, was curated by pianists Steven Blier and Michael Barrett, respectively Artistic Director and Associate Artistic Director.