(comicbook.com)When asked whether “Lord of the Rings” was an allegory for Hitler, J.R.R. Tolkien said he “cordially disliked allegory” and preferred the reader to make up his own mind.

I don’t like being hit on the head with a message either or as Moss Hart said, “if you’ve got a message, send it Western Union.” But this nice movie does it very gently and so I liked it. I know that the film has special meaning for many– a film with positive characters who all happen to be black, and that’s a plus.

(imdb.com) Here we are with a Shangri-La-like  African country run by Africans for millenia and under the noblest and most ethical conventions. The arts flourish and there are lots of opportunities to enjoy gorgeously imagined architecture, 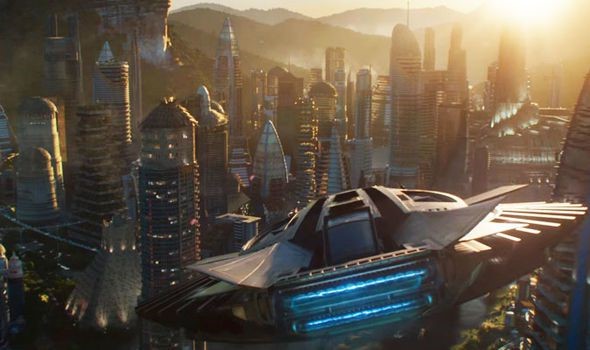 (downtrend.com) tapestries, and drumming music. Technology is far ahead of the rest of the world so medicine, transport and computers are advanced.

(Wakanda as seen in Marvel comics) The king’s private protection squad is all women and women play many strong roles in the film. 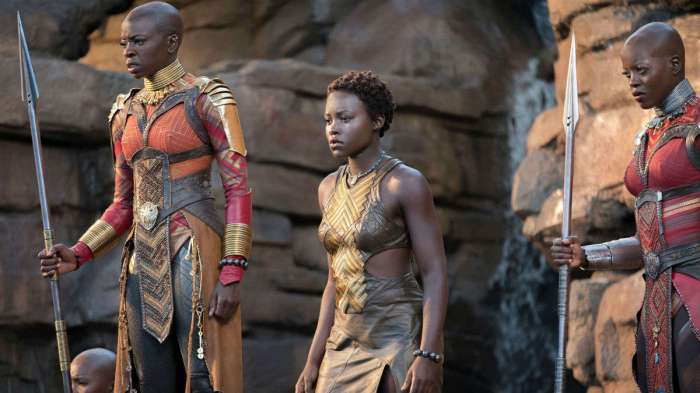 (gamespot.com) There are, as always, a few flies in the ointment so that we could have some conflict in our movie. But even then, the challengers to the king are offered redemption and although only one takes it, the other dies with a memorable line. Would that real life was like this.

(variety) And, of course, it’s not, because this is entertainment and feel-good entertainment at that. A few notes: there is no sex in this movie–one chaste kiss and that’s it. So if that’s what you’re looking for, forget it. Also, although this takes place mostly in Africa, there are very few animals, except for some rhinos modified to be war machines but which have a propensity to lick people. Finally, except for the requisite fight scenes, there’s not too much violence.

(wallup.com) Knowing that the rest of the world would destroy them if it knew of the foundation of Wakanda’s riches, vibranium,

(marvelcomics) its inhabitants keep their nation hidden, while their brothers and sisters worldwide suffer from war, sickness and poverty.

I won’t spoil the film for you but I do want to assure you that everything turns out ok, and of course, isn’t this why we go to the movies? I do. This movie is fun and I heartily recommend it to everyone, unless you’re a sourpuss. Standout actors include: Chadwick Boseman, Angela Bassett, Forest Whitaker, Lupita Nyong’o, and Martin Freeman.