If you miss it, you will miss one of Broadway’s greatest actors on stage. I am speaking of course of Adam Driver,

(nytmes) who turns in a titanic performance as Pale/Jimmy. In the middle of the night, I woke up and said to my long-suffering partner, “this play is about love, loss and art,” which is a pretty safe bet as almost everything written in the 20th century is about art.

Rory and I actually saw this play twice and read it in between. At first, we thought the play was weak, because when one character seems to have all the best speeches and stands out, you might think that.

But after reading it, thinking about it and seeing it again, we decided it’s a very good play indeed, and it’s just that one character and the actor who inhabits him, command the stage.

AIDS is not mentioned, but Lanford Wilson’s play centers on the personal grief of losing valuable people in the arts, a constant theme in the 80s. There are four living characters in the play and one dead one, a consummate dancer, who is made to come alive through others’ memories of him. (Brandon Uranowitz and Keri Russell, culturalattache.)

Of the five characters, four are artists who are struggling to achieve something, the dancer, a would-be designer, choreographer, writer, and one, Pale, is the catalyst.

(David Furr, Uranowiz and Russell; nytimes) Until Pale enters their lives, their art is flagging and so are their lives. He enters 20 minutes into the play, coked up and acting pretty crazy in one of his rants but from that moment, you can’t wait for him to appear again. Although the other actors turn in fine, workmanlike showings in this ensemble piece,

(latimes) they can’t stand up to Driver. When Keri Russell, his vis-a-vis, says to him that he’s “too dangerous” to stay with, you realize what she means.

Other reviewers have mentioned the creator of the role, John Malkovich,

(pinterest), both fine actors, as being more nuanced, more powerful, etc., than Driver but they’re not on stage and Driver is. So go to see him. When he leaves, the play closes and you will know why.

You can get seats for under $100 and the Hudson Theater is a lovely period place to see a show. I think many in the fairly young audience hadn’t seen a live show before as they gasped at the frankness of the language and overt sexiness of the plot. 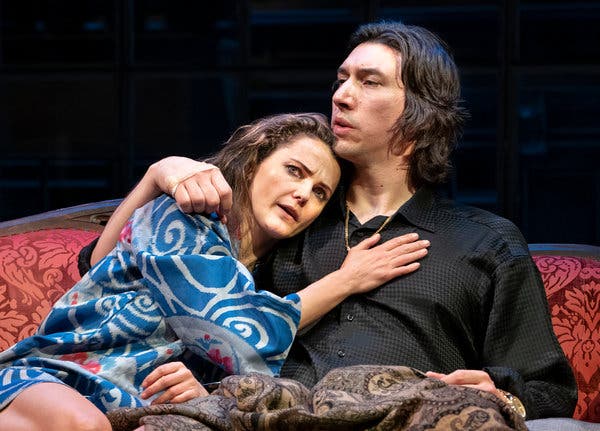 (nytimes) They knew the actors from film and TV, but after all, this is what live theater does best, and Driver, a Juilliard-trained stage actor knows just how.