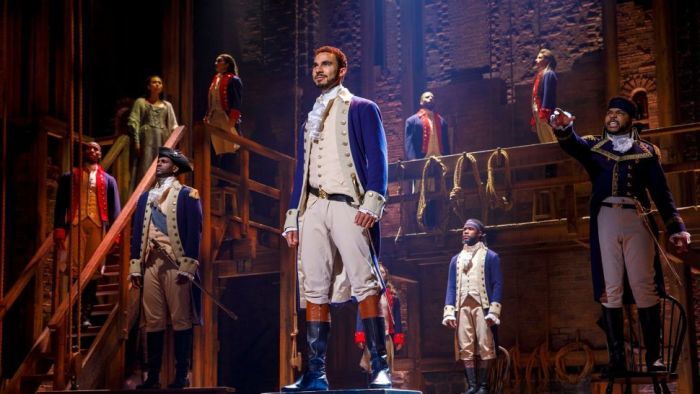 (playbill) OK, it took us four years but we got there. Why so long? well, we were put off by the fact that it is rap, which is true, but that’s not all there is to it.

All the entertainment values are right there before you because some very talented people helped Lin-Manuel Miranda bring this to the stage. The Tony-award-winning music, though certainly rap, is tuneful and infectious.

(WBUR)Andy Blankenbuehler’s Tony-award-winning choreography incorporates traditional Broadway style with break dancing, jazz and ethnic rhythms. The orchestrations/arrangements by Alex Lacamoire, who also won a Tony, feature difficult harmonies that the singers manage fearlessly.  The direction by Thomas Kail,  another Tony-winner, is seamless.  The show is based on the Pulitzer-winning book by Ron Chernow and gives us a distilled view of Hamilton’s sometimes troubled marriage and his enmity with Aaron Burr.

We didn’t really miss Miranda, who may be a better creator than singing actor. We saw Austin Scott as Hamilton and he was first rate as were all the singers and dancers.

BIG ALERT–this is a beautiful old theater and in this case, that means NO ELEVATOR. Bad news for those with limited mobility. What it means is if you succeed in snagging cheaper seats on Stubhub, they will be high up. Downstairs, they’re going to be very expensive.

Having said all that, is it worth going? yes, there’s enough talent on the stage and in the pit to warrant a serious outlay of funds if you can do it. Specifics: we paid $108/ticket which is as cheap as I have seen it on Stubhub; we sat in the next to the last row of the theater. The good news is that you can hear and see perfectly from there. The bad news is that we were huffing and puffing by the time we arrived and we were not inclined to go back down during intermission to visit the rest rooms. So, plan accordingly.