(timessquarechronicles) The Gingold Theatrical Group, led by Director David Staller, regularly produces excellent readings of George Bernard Shaw’s plays as part of its Project Shaw series. Terrific actors taking a busman’s holiday on Monday nights when Broadway is dark, appear regularly at the readings directed by Staller. Those of us who long to see Shaw’s plays enjoy having this opportunity.

Every year, the troup also mounts a full production, usually of a major Shaw play, and this year it is Caesar and Cleopatra which has not been seen in New York since 1977.

The excellent cast, starring Robert Cuccioli and Teresa Avia Lim as the title’s main characters, excel at delivering the Shavian wit and wisdom we expect from the master.

A simple unit set that sometimes represents the Sphinx, sometimes the Pharos lighthouse and sometimes the palace works very well. Simple white costumes are all we need to visualize the action. Cleopatra’s transits from fantastical child to eye-catching woman right in front of us.

Caesar, Shaw’s ideal man, retains his delight in the young Cleopatra but is never blinded by her. As he says, “I was not betrayed by her because I did not trust her.” Nevertheless, he kindly agrees to send her the young and handsome Mark Antony because he understands her need for someone who is a lover, not a statesman. 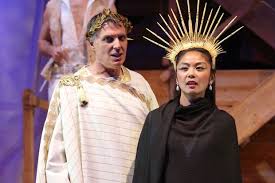 Shaw’s views on how how to maintain the peace while everyone around you is crying out for war still resonate today. It seems to us as though the political murder that takes place must bring about war, especially since everyone agrees it was justified. Only Caesar understands that this vengeance will beget intolerable destruction.

For those who worry about whether this play is too serious, ponderous or philosophical, keep in mind that Shaw’s works have endured in large part because he delivers his thoughts in brilliant comic form.

If you remember fondly the lovely film starring Vivian Leigh and Claude Rains, you will enjoy this production.

(hollywoodreview) Staller’s command of the Shaw cannon enables him to make strategic cuts where needed in order to create a seamless and fast-moving play.

Disount tickets are available on line for about $50. This is great Off-Broadway theater in a lovely little playhouse on 42nd Street’s Theater Row. No Broadway crowds here. Don’t miss this loving tribute to a great author–you’ll laugh, think, and enjoy at the same time.