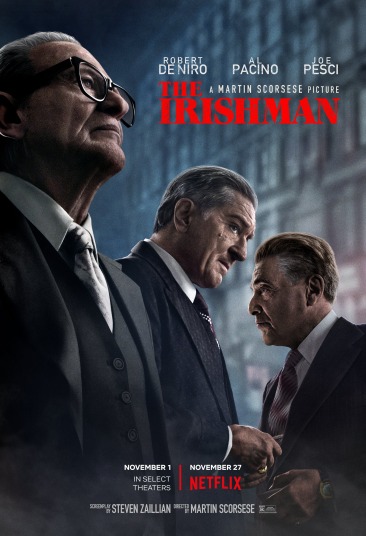 (imdb) The expectations were high but Martin Scorsese’s film has exceeded them with a magnum opus summing up his life’s work. The Irishman is elegiac, not only because the story is narrated by a man in his 80s, but also because the director and his three stars, Robert De Niro, Al Pacino and Joe Pesci, are also in their late 70s, looking back at a lifetime of great accomplishment.

(W Magazine) Together, they are a knockout. The movie is surprisingly funny, as the audience coasts along with the characters in this strange universe of “Goodfellas” that we have become used to from Scorsese’s and Coppola’s films.

Much has been made of the new de-aging technique, particularly used with De Niro,

(irish times) but after a few minutes, you get used to it, get caught up in the story and it ceases to be of interest. Neither does the long running time, 3 1/2 hours, bother us. At the end, we all thought–maybe it was too short. 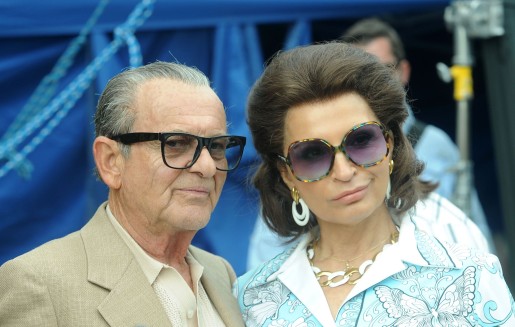 (nme) and signs on for a loyal lifetime of friendship, but mostly performing unsavory jobs for him. After all, he tells us, he needs to take care of his ever-growing family and that means he needs more money.

We get a glance at the young Frank’s tour of duty in the military,

(collider)(where he unhesitatingly kills two German prisoners on command. We’re left to wonder whether his wartime experiences changed him or simply qualified him for the work he later takes up. De Niro’s cool, unemotional, performance doesn’t clarify this for us.

It is a tribute to the actor that we come to like and sympathize with Frank, even as we see him kill people, seemingly without remorse. And Frank, after all, is not without his good points. When he beats up the grocer who shoved his young daughter, we think–well, kind of excessive, but understandable., and he loves his daughters dearly. Scorsese’s masterful direction gradually reveals to us, however, how much of a toll Frank’s violent acts gradually take on his children, leading to a sad estrangement in his later years.

Jimmy Hoffa, for many years leader of the Teamsters Union, (played by Al Pacino in what I thought was a somewhat over-the-top performance, though others liked it) becomes Frank’s second mentor. Frank tries desperately to protect Hoffa after he returns from prison and attempts unsuccessfully to recapture the union leadership.

(nybooks) Again, De Niro shows us Frank’s mental agony as he is forced to confront the ultimate ugly task for his masters.

The last half hour or so of the film depicts the aging Frank, close to death, with De Niro delivering what may be the most powerful work of his career in this portrait of the end of his life, his memories and perhaps his regrets.

There is a real book, “I Heard you Paint Houses,” by Charles Brandt, on which the film is based and many of the claims in it have been questioned. It doesn’t matter to us, however; we see this equally well as a true story or a work of fiction.

This film opened the 2019 New York Film Festival and will be shown at the Shubert Organization’s Belasco Theatre in New York City from November 1st to December 1st.